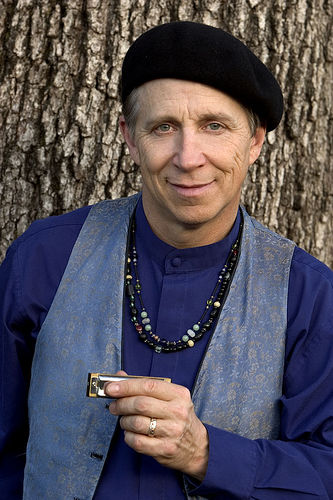 Norton Buffalo was one of the best harmonica players in the broad country related music genre. Born and raised in California he played with Commander Cody and his lost planet airmen, Steve Miller band, Bonnie Raitt, the Doobie Brothers to name a few. As a solo artist he recorded a few albums that are still available and always well produced:
Love in the valley moon

He had a very nice duo with Roy Rogers (sometimes a quartet) and I strongly suggest those 2 albums :
Roy Rogers and Norton Buffalo
Travellin Tracks

He was a great singer, chromatic and diatonic harmonica player a combination that is actually pretty rare. He released 2 very interesting education dvds one about acoustic blues :

All this material is well worth the money.
Norton harmonica signature playing features extensive use of trills probably adapted from the chromatic to the diatonic, a few very fast licks and some mean blues effects. He was also one of the most musical player being able to play just a few notes or harmonies in the background to backup a singer or guitar player.

Here is a rare footage of Norton Buffalo with the Steve Miller Band. The opening riff in the high register has become a signature lick for many players including JJ Milteau.